Anti-aging from the inside: Spermidin & interval fasting for a conscious life

Home/Spermidine/Anti-aging from the inside: Spermidin & interval fasting for a conscious life

Anti-aging from the inside: Spermidin & interval fasting for a conscious life

A look at the demographic trends in humanity shows that general life expectancy is increasing. The desire to spend the extra years of life as healthy and youthful as possible is therefore more relevant than ever. Fasting is a useful instrument here to prevent premature ageing. Studies already point to the positive effects of fasting. This can be traced back to the phenomenon of autophagy – an endogenous process that is triggered by the body in the course of fasting, cleansing the human cells of old deposits and recycling them. Current studies on spermidine, a natural substance from wheat germ, are also groundbreaking in this context. Researchers have been able to demonstrate effects similar to those that occur during fasting. Interval fasting can additionally strengthen these effects. This form of chamfered is in the comparison to other variants ideally into the everyday life integrable, without having to do completely without food. Consciously and with pleasure. The following article explains what is behind the phenomenon of spermidine and interval fasting and how you too can activate your body’s own cell renewal.

General effects of fasting on health

Fasting is understood to mean the temporary and voluntary renunciation of food. This has been practiced for many years by people from different cultures and goes back to spiritual and religious rituals. In the course of fasting, various processes are triggered in the human body, with an influence on mental and physical health [1].

Fasting can help to

Fasting is also becoming increasingly important for doctors in terms of health promotion and prevention. Fasting for a limited period of time can activate the body’s self-healing powers and thus influence a number of complaints and diseases [2].

However, fasting should not be seen as a diet with the primary goal of losing weight. Chamfered leads temporally limited to a weight acceptance – in the long run however not, unless the life-style is consciously changed afterwards. Besides there are different chamfered kinds. The most well-known are as follows:

Depending on the type of fasting, however, the supply of nutrients can be endangered, which is why, for example, senior citizens, pregnant women, nursing mothers, and adolescents or children should refrain from fasting. The same applies to people with specific diseases [4].

Physical and psychological processes are stimulated, including the process of autophagy, probably the most well-known and important phenomenon in fasting, which also plays a key role in the anti-aging effects. But what exactly is autophagy?

Autophagy – the body’s own recycling program

The term autophagy describes a process that is stimulated during fasting. The body’s own phenomenon was first described in the 1960s and the Japanese Yoshinori Ohsumi received the Nobel Prize for the discovery of this vital process. Autophagy is about cellular recycling. A type of recycling program that breaks down old, damaged or misfolded proteins and cellular waste and then reuses them. Disorders within this system are associated with the following symptoms and diseases:

But how can we ourselves stimulate this vital process?

Both can stimulate the process of autophagy. However, fasting is not suitable for everyone and is usually difficult to integrate into professional and private life. Interval fasting is an ideal alternative, where you do not have to go without food completely and still activate the body’s own autophagy. In addition, you can strengthen the process with spermidine and thus, as with fasting, stimulate the body’s own autophagy. In the following you will be introduced to the principle of interval fasting.

Interval fasting is an option for anyone who does not want to constantly starve and count calories. Also the pleasure does not suffer from this special method. The alternative to long-term fasting works as follows:

The 16-hour fasting phase requires some getting used to at the beginning, but the body adapts to it after about 10 days. In most cases, this phase is held from 8 p.m. in the evening until 12 noon. Lunch is therefore the first meal of the day – 2-3 meals within the 8 hours are still recommended. In this way, the supply of nutrients can continue to be ensured and possible muscle loss can be excluded if sport is continued.

The possible advantages of interval fasting:

Why the 16 hour lunch break?

It is precisely during this longer break from eating that the process of autophagy takes place – the self-digestion and recycling of cellular waste and waste products in the spaces between the cells.

In comparison to complete food renunciation, as with therapeutic fasting, interval fasting thus requires a comparatively simple changeover. Nowadays people tend to eat too often and above all too much. The abundance of food on offer also has its downsides – interval fasting and the associated meal breaks can help people to deal better and, above all, more consciously with the excess food supply.

Interval fasting can also be beneficial for subsequent symptoms and diseases:

To increase the effects, experts also recommend a healthy and balanced diet and sufficient exercise [6].

In addition, spermidine is also proving to be a new miracle cure for all aspects of fasting. Spermidine is a natural polyamine and is contained in high quantities in wheat germ. Why spermidine can help with illnesses such as dementia or premature skin aging and how it drives the process of autophagy, you will learn in the following paragraphs.

Spermidine – the new Miracle Cure for a healthy life

Spermidine belongs to the group of polyamines and is essential for numerous functions of the body. The natural substance plays an important role in cell growth, cell proliferation, regeneration and differentiation of immune cells and thus also in the regulation of inflammatory reactions.

Research showed that yeast cells cultivated in a medium rich in spermidine lived four times longer and human immune cells lived three times longer than in an otherwise identical medium without spermidine. It has also been shown that the lifespan of insects, worms and mice was prolonged by about 30% through the intake of spermidine [7].

Spermidine thus represents an effective and natural alternative when it comes to holistic anti-aging.

Spermidine is present in relatively large quantities in the following foods:

Studies on spermidine and anti-aging

The “Smart-Age” study of the Berlin Charité examined the effects of natural spermidine from wheat germ on memory and learning as well as on brain structures. Participants were elderly, still healthy people who, however, noticed deterioration in their memory performance. Spermidine reduces the cellular waste associated with the development of degenerative diseases and has the potential to prevent age-related memory loss [8].

The Graz researcher Dr. Frank Madeo and his team have also found that spermidine has positive effects on heart and cardiovascular system [9]. In addition, researchers at the University of Graz were able to prove that spermidine has autophagy-stimulating effects which can protect against premature ageing [10].

Another study at the University of Innsbruck found a connection between the administration of spermidine and lower mortality. The prospective cohort study was conducted with 829 subjects, also known as the successful Bruneck study [11].

In summary, spermidine, just like fasting, can stimulate the process of autophagy in the human organism. Many studies suggest that a lack of cell purification is associated with various complaints and diseases. Autophagy therefore also plays an important key role in the development of degenerative diseases such as dementia and can prevent or delay the development of other age-related phenomena.

In combination with fasting the effects can be intensified. Since fasting is not suitable for everyone, interval fasting is an ideal alternative that can be easily integrated into every day life. For the health promotion and prevention it is recommended kurmäßig 14 days interval chamfered (8 hours eating, 16 hours chamfered) in company to the income of Spermidin for at least 2 months. In this way you can slow down the aging process in a natural way – for a conscious life. 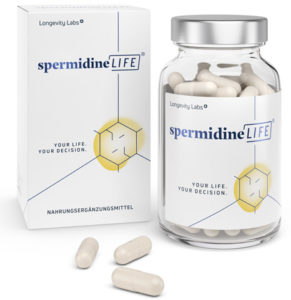